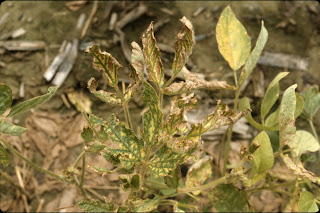 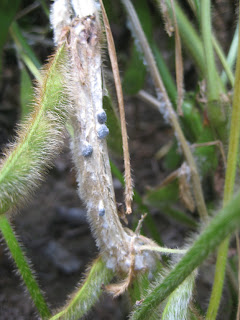 Probably due to the excessive soil moisture and cool July temperatures, soybean sudden death syndrome (SDS) is as widespread and severe as it has been in 20 years. The disease is actually caused by a Fusarium fungus that infects and rots the roots. The fungus then produces as plant toxin that results in foliar symptoms, especially interveinal yellowing and death, and severe defoliation and pod drop in severe instances. Typically a plant needs to be defoliating before the pods reach the R6 (full seed) stage in order for the disease to seriously damage crop yield. Normally, SDS comes in too little and too late to do much damage. However, the additional soil moisture early in the season probably supported additional root infection, which normally occurs during the early vegetative stages. There are tremendous differences in varietal susceptibility, and many producers have been lulled into a false sense of security with the limited SDS development over the past 10 years. As a result, I doubt that many soybean producers in the state have made SDS resistance a "must have" characteristic when selecting a variety. I don't blame them with SDS being such a limited problem overthe past decade. However, planting a highly susceptible variety is one way to encourage serious SDS if the weather and soil conditions favor SDS development.
Dr. Chad Lee was recently called to a field in Boone County in northeast Kentucky to look at a problem field. What he found was a disease I had never seen in Kentucky at damaging levels: white mold. The disease is aptly named in that a white mold forms on the outside of stem lesions. In these lesions, mixed in with the white mold, you will also commonly see black structures, called sclerotia, which are the survival stuctures of the causal fungus. The disease was quite severe in at least one field. White mold is mainly a disease problem in northern soybeans. We have lots of the fungus that causes white mold in Kentucky, but the timing of key aspects of the disease cycle are normally out of sync here. However, the additional early season moisture coupled with the coolest July in 100 years apparently changed all that. Hopefully we won't see another serious outbreak of the disease here until the next coolest July occurs in 100 years!
Posted by Don Hershman at 3:30 PM