Did the heavy rains reduce nitrogen in wheat?

The following are some comments from Lloyd Murdock, Extension Soil Scientist, University of Kentucky

There a number of the low lying spots where the wheat is turning yellow due to water standing for extended periods of time.  In some cases, these yellow areas are wheat streak mosaic virus, but in other cases the yellow color was probably due to the lack of oxygen for extended periods of time.  All of the yellow leaves were mainly the older ones and the newer leaves where healthy and well colored (i.e. green). In these cases, wheat in lowest parts of the low spots has more yellow leaves and is more stunted.  Assuming no more extended monsoons, I would expect that most of the plants to continue development and do well.  The most stunted plants may be a little restricted on yield.   If there are areas where the plants are entirely yellow then these plants would not be expected to recover or would recover and be severely limited in yield.

The amount of nitrogen lost in these fields is probably not that much.  Since it was cool during these waterlogged conditions, denitrification was probably not very active during this time. The primary source of nitrogen loss would be leaching but not much leaching occurs in our silt loam soils.  A safe guess for nitrogen loss from our silt loams soils would be a maximum of about 25% of N applied and less than that in most cases. So if 50 pounds N/acre was applied before the rainy spell then one would only expect about 12 pounds N/acre to have been lost, at the most.

The following is in the Kentucky Pest News from Don Hershman

Over the past few weeks, we have been getting questions about fields that look similar to Fig. 1.  Initially, we thought the problem was related to nitrogen deficiency in areas of fields that were subject to water saturation. In some cases, inadequate availability and/or uptake of nitrogen may be the culprit. However, we have since determined that most of the fields exhibiting patches of stunted and yellowed plants are most likely affected by Wheat Soil-borne Mosaic Virus (WSBMV).  We have come to this conclusion based on samples from symptomatic fields that have tested positive for WSBMV using a very reliable antibody-based diagnostic test known as ELISA. 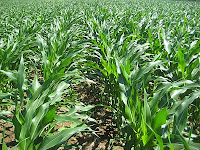 Corn silage is a valuable feedstock for many dairy farms and some beef operations. The higher price of inputs this season puts even more pressure on maximizing yield without breaking the bank on inputs. Some of the following guidelines should help with a successful planting season and put the silage corn crop in the best position to reach high yields.

The Risk Management Agency, who oversees the crop insurance program, released their new Common Crop Insurance Policy (CCIP) or otherwise known as COMBO. COMBO represents a new insurance plan structure designed to simplify choices. In COMBO only individual plans not county level plans like Group Risk Income Plan (GRIP) are affected. The goal of this short article is to educate producers on the differences between COMBO insurance plans.

The cold weather and late emergence of some wheat across the state has many producers concerned about how their crop will do this spring. Much of the first application of fertilizer nitrogen has been applied as well. The warmer temperatures predicted for the week of March 14, 2011 should result in rapid wheat growth. There are several management decisions that must be made, including if the stand is suitable to keep.

Planting soybean into sod is an option for producers looking to increase acres.  Soybean could generate a gross return of  $500 per acre, or more, depending on yield and marketing. Soybean is also a good option for producers who need to renovate pasture and hayfields. Some producers have a lot of experience with soybean while others may be looking at the crop for the first time. The following guidelines attempt to be applicable to both groups of producers.
Consider the following when converting sod to soybean: