Getting a lot of questions about these bugs.

I have been getting lots of questions about the bugs shown in this photo. Can you identify them? Folks are seeing lots of them in soybean fields. This photo by Patty Lucas shows a nice assortment
of the nymph stage (immature) green stink bugs. It is quite common to see aggregates of these near the end of the season. They are generally noticed because they are near the tops of plants, and leaves are beginning to drop.

Read more »
Posted by Doug Johnson at 5:17 PM No comments:

New Soil Extension Specialist Excited to be in Kentucky

Wheat diseases reduce grain yield and/or quality in most years. Many wheat producers rely on foliar fungicides as their primary disease management weapon. Foliar fungicides are certainly an important disease management tool. However, pre-plant decisions made – that is, decisions being made right now for the 2015 wheat crop - have the greatest impact on which diseases develop during the season and to what extent. Thus, it is critical to make as many of the “right” decisions as possible to reduce the potential for diseases to reduce both grain yield and quality next spring.

For more on how pre-plant decisions impact disease potential, go to this link:
http://www2.ca.uky.edu/agcollege/plantpathology/ext_files/PPFShtml/ppfsagsg6.pdf 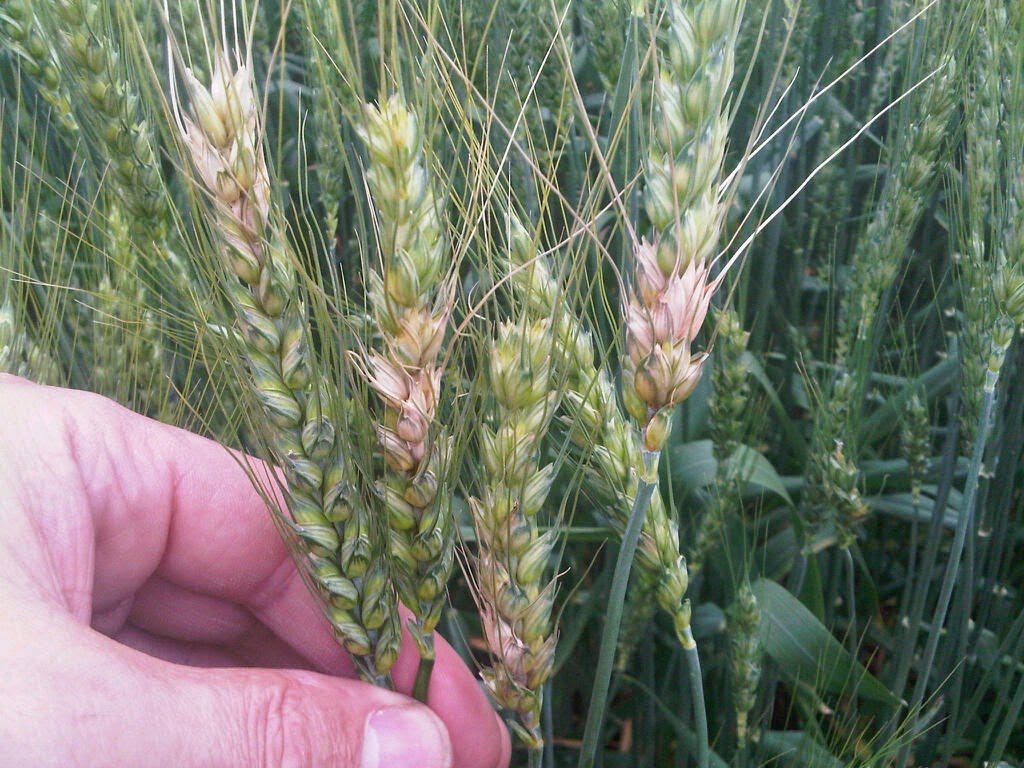 Posted by Don Hershman at 9:58 AM No comments:

There have been numerous reports across the state of soybean sudden death syndrome (SDS) showing up in certain fields since August. SDS, which can be a devastating disease, is caused by the soil fungus Fusarium virguliforme (Fv).  Fv is actually a soilborne fungus that attacks roots early in the season and later causes a root rot. Infection is favored by cool soils with good moisture; thus, this spring was perfect for infection in most full-season fields. As plants go into the reproductive stages, the causal fungus produces a plant toxin that causes above ground foliar symptoms of yellowing and tissue death between the veins (see below picture), and later defoliation. If the disease comes into the field during the early pod development stages, and enough of the field is impacted, SDS can result in almost total yield loss. This is, however, an extremely rare event in KY. More typically, the disease causes significant yield losses in spots in a field - usually the lowest portions where soil moisture is greatest - but the majority of the field has little to know yield impact.  That is, most plants either escape disease altogether or symptoms come in after mid to late -pod fill. Plants showing late symptoms will generally yield very well. Thus, the appearance of symptoms is not necessarily a good indicator of yield loss potential. Timing of symptoms is everything when it comes to SDS.

Read more »
Posted by Don Hershman at 3:31 PM No comments: 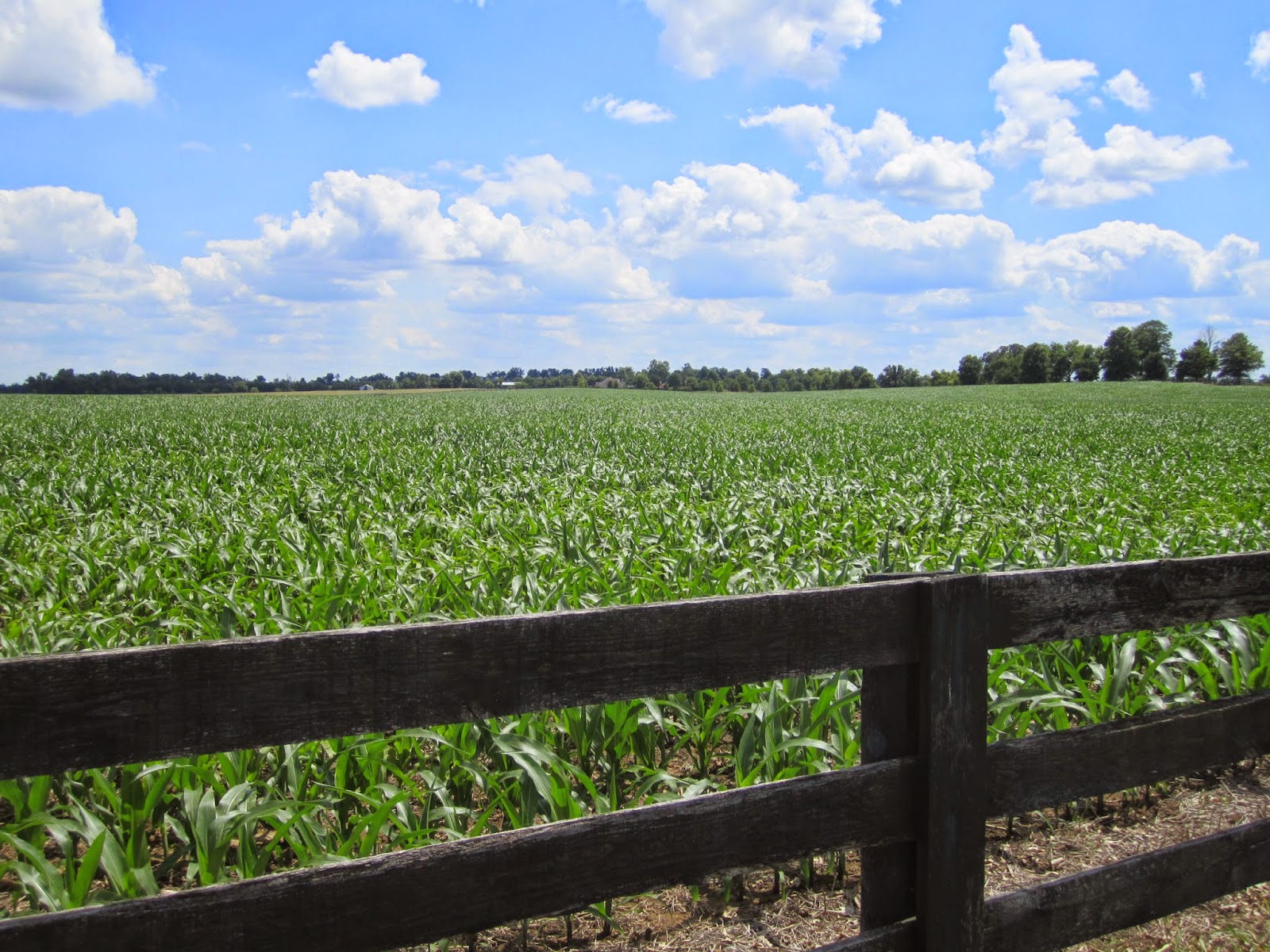 The 2014 Kentucky Extension Corn and Soybean Contest forms are available online.
Both forms are linked at the Grain Crops Extension Yield Contest page.

Got Fall Armyworm? Want Some More!!!

For the past week or so we have been dealing with large populations of fall armyworm (FAW) caterpillars. These hungry little pests have devoured alfalfa, forage and lawn grasses while munching around the edges of soybean fields. I am sorry to inform you that while this problem is decreasing it may also reoccur.

The caterpillars that have thus far caused our damage are probably the result of an increase in FAW moths during the last week of July. You must remember that FAW has been trickling into KY for several months and is a normal part of the pest pressure in August and September, particularly in the western 1/3 of the state. You can see this “pulse” in Figure 1. Also note that this graph is updated every week and can be viewed on the IPM web pages at: 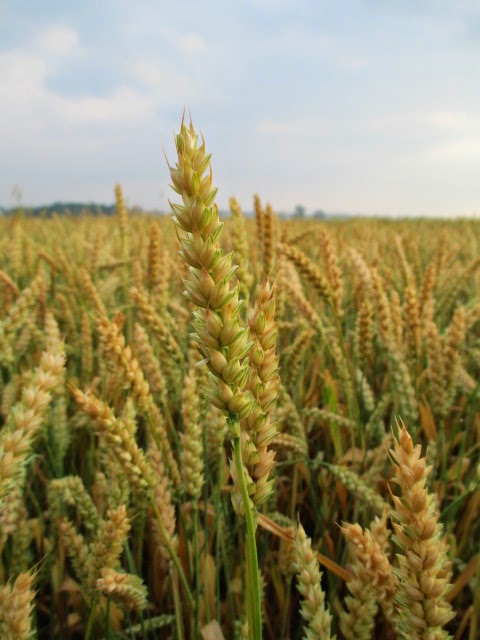 The 2014 Wheat Contest Winners are available online. The highest yield submitted was 120.26 bushels per acre by Jeff Coke in Daviess County. Jeff's field was disced twice. The highest no-tillage yield reported in 2014 was 115.98 bushels per acre by Duncan Gillum in Todd County. Both Jeff and Duncan are repeat winners from 2013. Area winners for 2014 included Merle Coblentz, SBJ Fischer, Gary Summers and Homestead Family Farms.

Something is Definitely Up with Fall Armyworm!!

Something is most definitely up with armyworm (Mythimna unipuncta), fall armyworm (Spodoptera frugiperda) or both. I have received information from six counties in less than a week indicating the

Read more »
Posted by Doug Johnson at 5:28 PM No comments: