Keeping up with Argentina

If you have an interest in some of the things I am seeing in Argentina, you can take a look at a separate blog, Argentina Update. This blog is a rough draft of my notes. I will include as many images as since they tell a better story. I will keep notes on the crop progress, agronomics, farm management, and groups and organizations that help producers. 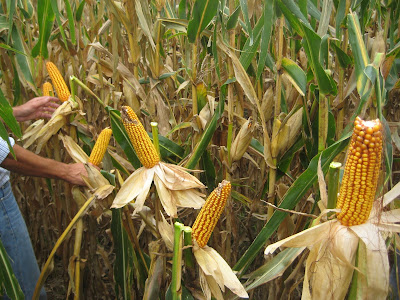 Email ThisBlogThis!Share to TwitterShare to FacebookShare to Pinterest
Labels: Argentina

Crops from Way Down South 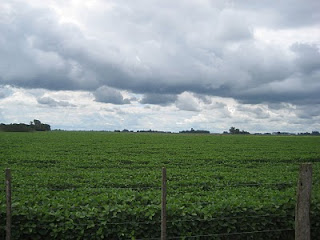 The full season soybeans are in pod stage and the corn is about 1/2 milkline. Yield potentials are excellent as long as it doesn't rain too much over the next month.

This probably seems like an odd report in the middle of winter, but it is exactly what we are seeing down south. . . in Argentina. A group of farmers from the Kentucky Soybean Board and UK extension faculty visited with farmers, agribusiness representatives, university scientists and students for about one week. During that week, we met some wonderful people. Some even apologized to us for not being able to speak English well... and we're in their country. 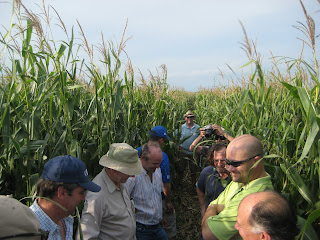 We also saw a tremendous crop. However, that crop has a little way to go. Last year, this region of Argentina had its worst drought in 100 years. This year, the crop may ultimately suffer from too much rain. Farmers here are nervous about getting their crops harvested, since rains typically increase over the next month. Some things are universal since farmers back in the States do the same when they see a good crop in the field.

We visited some of the more productive soils in Argentina, including northern Buenos Aires Province, south Santa Fe Province and southeast Cordoba Province. One of the farmers we visited said that typical annual rainfall is about 45 inches, but over the last two months his farm in this region received nearly 38 inches! Other regions of Argentina are in a drought this year.

While my colleagues are heading home, I'll be here a few more months. I plan to give some brief reports during my stay... including how the crop looks.
Posted by Chad Lee at 4:58 PM No comments: