I continue to receive reports of Soybean Aphid (SA) populations at or near threshold level. In Addition, there are larger populations being reported but on more mature beans. Those interested in soybean production are reminded that historically SA populations reach their greatest size in September. This is not new. What may be different in 2009 is a larger proportion of later planted soybeans (due to a rainy spring) which results in more numerous soybean plants maturing to the R6 stage later in the year. Simply put this places more fields at greater risk than we normally see. It may also be the case in 2009 that SA populations are larger in size because we have experienced a cooler summer. In many KY summers, temperatures over 90 F predominate. These higher temperatures reduce the population growth rate.

Regardless of the reason, soybean plants less mature than R6 will remain at risk of SA populations. There are still fields of soybeans at the R4 stage (seems unbelievable, doesn’t it?!), which will take several weeks to mature to R6.

The threshold remains the same 250 aphids / plant, on 80% of plants with an increasing population. In addition this threshold accounts only for the aphid damage on the plants. As KY producers most always plant narrow row soybeans you will need to consider the losses associated with running down your beans. A very rough guess is about 9%, but this depends upon your row width,the width of the tires on your spray rig and the width of each pass (boom width).

On a final note; a population of Mexican bean beetle (MBB) has been reported from Pickett Co. TN. This is a TN/KY border county just south of the Kentucky Co.’s of Cumberland & Clinton. It has been many years since we have seen problems with MBB in KY, but it may be worth a look in the eastern region of our soybean production area. My thanks to Mr. Richard Daniel, Extension Agent,Pickett County, TN. for the photo of the MBB damage. 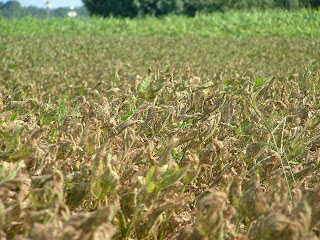