Aflatoxins are showing up in occasional lots of harvested corn from this season’s crop. Aflatoxins metabolites of the fungus Aspergillus flavus, are potent toxins and carcinogens in animals, and may also be human carcinogens. Aflatoxins are probably the most well-known mycotoxins, because they have long been regulated by the US Food and Drug Administration.

During grain fill, many Kentucky corn fields experienced high temperatures (highs above 90°F, with warm nights) and drought conditions, which favor Aspergillus infection and aflatoxin contamination of the kernels. Kernel injury caused by insects, mechanical damage during harvest or handling, or other causes can lead to an increase in aflatoxin levels (Figure 1), though infection and contamination can occur even in undamaged kernels if conditions are highly favorable for the fungus. 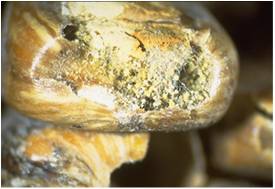 
Grain Storage
Mycotoxins such as aflatoxin can accumulate in corn in storage.Table 1 below provides recommended conditions that will suppress mold growth in storage. Corn with evidence of mold or mechanical damage or excess trash should be held at 0.5 to 1% lower moisture content than recommended here. Monitor stored corn regularly for mustiness and grain heating.

Permissible levels Aflatoxins are regulated at the parts-per-billion level, an extremely low level. To put this in perspective, one part-per-billion is equivalent to one second in 32 years, or one kernel in a 10,000 bushel bin.

For many uses, grain must have less than 20 parts-per-billion (ppb) of aflatoxin. However, there are some permissible uses for corn with higher levels. For example, mature cattle can be fed corn with up to 300 ppb aflatoxin. Details on the permissible levels of aflatoxins in livestock feeds and human foods are available in the UK Extension publication, Aflatoxins in Corn, ID-59, http://www.ca.uky.edu/agc/pubs/id/id59/id59.pdf.

Sampling Corn for Testing
Aflatoxin testing is notoriously variable. Sampling for any contaminant in grains at the parts-per-billion level is highly variable. See Table 2 below for an illustration of this variability. 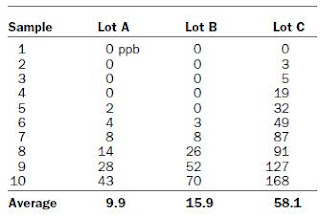 One can’t prevent this sort of variability when testing for aflatoxin, but one can make it worse by not sampling correctly. The recommended sampling procedure for corn is as follows: Take at least ten probefuls and collect at least 10 lb of corn. The corn must be below 16% moisture unless the test is being performed immediately. Test results from high-moisture corn may not be accurate if the test is delayed, as the fungus can continue to grow and produce aflatoxins. The 10-lb sample must be ground and mixed well before drawing a small subsample for testing. The AOAC International (formerly the Association of Official Analytical Chemists) requires that the entire 10-lb sample be coarsely ground to pass through a No. 14 sieve and mixed, and that a 2- to 4-lb subsample be ground to pass through a No. 20 sieve (about the consistency of fine instant coffee), before aflatoxin testing.

Test kits are available from several manufacturers. Some of these test only for the presence or absence of aflatoxins. Other, more sophisticated kits estimate the concentration of aflatoxin. If using one of these, grain should be ground and mixed as described above, and operators should be well-trained in the use of the particular test kit being employed.

Analytical laboratories provide the best estimates of aflatoxin concentration. Drawbacks of laboratory testing include expense and time delays while waiting for results.

Management for 2011
Stored corn should be managed as described above, so as not to allow aflatoxin accumulation in storage. As far as planning for the 2011 crop, any fields with aflatoxin this year have only a very, very modest increase in aflatoxin risk next year. Of course, most of those will be rotated as normal, and aflatoxin is only a concern in corn. Even for those that are sown to corn in 2011, aflatoxin contamination is driven much more by environmental conditions than by cropping history and agronomic practices. Of course, since aflatoxin contamination is commonly associated with drought and grain damage, it is advisable to use good agronomic practices such as: sowing adapted hybrids, avoiding excessive plant populations, reducing soil compaction (if present), and managing kernel-feeding insects.


Additional Resources Details on many aspects of aflatoxins are available in the UK Extension publication, Aflatoxins in Corn, ID-59, http://www.ca.uky.edu/agc/pubs/id/id59/id59.pdf

Grain storage recommendations are available in the UK Extension publication, A Comprehensive Guide to Corn Management in Kentucky, ID-139, http://www.ca.uky.edu/agc/pubs/id/id139/id139.pdf