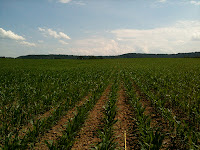 The cross location averages are the best indicators (or predictors) of hybrid and variety performance next season. Most farmers think that the field closest to their own farms is the most relevant to them. By relying on the closest location, the person makes the assumption that the environmental conditions in 2013 will be exactly the same as the conditions in 2012. Most of us are hoping that 2013 is much better than 2012! The cross location average provides the best indicator of hybrid or variety performance across various environments.