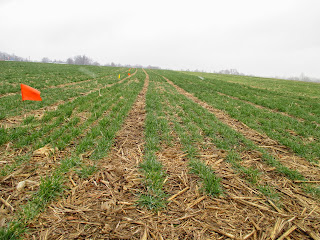 According to the Kentucky Mesonet (kymesonet.org) on April 15, 50 of the 64 Mesonet sites had low temperatures below freezing. The 14 counties that remained above freezing were Allen, Barren, Fulton, Hardin, Hart, Hopkins, Letcher, Marshall, McLean, Metcalfe, Muhlenberg, Simpson, Warren, and Webster. There was no Mesonet site that recorded 12°F or less for 2 hours, but there was one Mesonet site, Harlan county, that had a low temperature of less than 24°F for more than 2 hours. If any wheat is grown in Harlan county and it were between Feekes 1-5, widespread injury probably did not occur; however if any wheat in that county is jointing then injury is likely.

On April 16, only 4 counties remained above freezing: Calloway, Christian, Crittenden, and Fulton. There were 6 counties that low temperatures less than 24°F for more than 2 hours: Harlan, Harrison, Johnson, Lewis, Pike, and Rowan. If the wheat crop in these counties had reached Feekes 6, injury is likely.

Typical freeze injury for wheat that is Feekes 1-5 is leaf yellowing (chlorosis), burnt leaf tips, silage odor, and/or blue cast to fields. Characteristic injury from Feekes 6-7 is death of the growing point, leaf burning or yellowing, lesions, splitting, or bending of the lower stems, and silage odor. Although the temperatures recorded by the Mesonet indicate that wheat freeze injury is unlikely, it is important to scout fields to determine if freeze injury has occurred in small areas of fields. Freeze injury can be isolated to low areas of fields where cold air settles. It typically takes about 10 days of warm temperatures before injury can be seen. Be sure and check for wheat stems damage close to the soil surface.