Guidelines for Harvesting and Storing Ear Corn in Kentucky 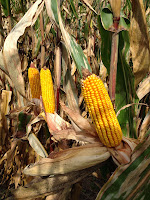 Corn that will be harvested and stored on the ear should be allowed to dry in the field as long as weather is favorable and stalk strength is adequate. During field dry-down, be aware that moisture in the cob is much higher than the kernel for corn above 15%, as shown in Table 1.

If drying in a typical wooden crib with a rectangular cross-section (8 to 10 feet maximum width) or in a round wire mesh crib (12 to 15 feet max. diameter) harvest should begin when the kernel moisture is no more than 18% from fields where insect and mold damage is minimal. During harvest, be sure that husks are removed as much as possible without generating too many loose kernels and minimize stalk pieces, weed seeds or plant fragments and other foreign material that can interfere with airflow once it’s placed in the crib.
If field damage compromises the crop and weather remains favorable, delay harvest a few days until the kernels dry to 16%. Otherwise, make arrangements to provide mechanical ventilation in the crib to speed drying and protect the crop from further damage. A round plastic drain tile or rectangular plywood duct can be placed in the center of the crib with a small fan mounted on the leeward end (away from prevailing wind) to pull air down through the pile and hasten drying.

The rate and extent of drying depends on weather conditions. Kernel moisture will approach the equilibrium levels shown in Table 2 after sufficient exposure to the corresponding environment. Average monthly temperatures in Kentucky during the Fall range between 70 in September to 40 in December, while the average relative humidity will be between 30% during bright sunny days to 90% or higher during the night and on cloudy, rainy days.

Typically, the harvest decision is often made on prevailing weather and crop conditions with the expectation that corn kernels will lose between ¼ to ½ of a point of moisture on a sunny fall day. Thus, corn can dry from 18 to 15% moisture in the field in 6 to 12 days of good drying weather in October when daily temperatures average 60oF. Crib drying is slower than field drying with the same weather conditions, but kernel moisture will usually reach 15% moisture within a few weeks of favorable weather.

Once dried to 15% or less, mold growth and mycotoxin production will stop as long as conditions remain stable. However, any mycotoxins that are brought in from the field will remain in the grain and managers must guard against conditions that could favor mold growth during storage. Damaged corn should be checked once a week until grain temperature and other conditions in the crib are stable. Cloth respirators (minimal protection) or partial face masks (better protection) should be worn to protect lungs from exposure to dust and mold spores during inspections. Look for any changes in the grain both on the surface and below the surface. If conditions don’t change after three consecutive inspections and temperatures below the surface are 50 degrees or lower (usually by mid-November), inspect every two weeks. Reduce inspections to once a month after temperatures throughout the bulk fall below 40 degrees (mid-December).

If small hot spots develop, carefully open the pile to fully expose the area for rapid cooling. If large hot spots develop, move a portion of the pile to another location to spread it out and reduce further heating. If extensive mold damage is found during storage, mycotoxin levels may increase so corn should be checked before feeding. See UK publication ID-59 for guidelines on the levels of aflatoxins for different animals and check with an animal scientist for specific questions on feeding once the level of contamination is known.