Fertilizer Use in Argentina

The nutrients most commonly purchased in Argentina are, in declining importance, nitrogen (N),phosphorus (P), sulfur (S), and potassium (K). Most soils found in the more productive region of Argentina (the Pampas) have high levels of bioavailable P because the soil parent material is rich in this nutrient. The use of S is increasingly common, as deficiencies of this nutrient are being increasingly detected. The soils of the Pampas are richer in bioavailable P, in comparison with soils found in other agricultural regions in Argentina. However, Darwich (1999) has reported significant declines in bioavailable P in these soils, relative to original levels, relative even to levels existing in the early 1980’s.
Despite the large increase in fertilizer use in the past 20 years, nutrient replenishment (replacement of nutrients removed in grain) is still very low and a topic of long-term concern.The fraction of total nutrient uptake that is recycled back to the soil averages about 34%, and replenishment of nutrient stocks with fertilizer averages about 41% for N, 61% for P, 6% for K,and 35% for S. This suggests that these soils will be progressively poorer in their fertility. This problem was also evaluated by Ciampitti and Garcia (2008), for soils of the Pampas region, and they concluded that only 31, 53, 1 and 27 % of the N, P, K and S, respectively, exported by crop harvest was replaced by fertilizer addition.

The situation has been improving with time, though only slightly (Figure 3). Phosphorus and sulfur replacement have made slow but steady progress, in part because fertilizers containing these nutrients are now being more routinely applied to soybean, the crop with the largest production area in Argentina. The Argentine fertilizer industry, as well as various Argentine governmental institutions, expects increased fertilizer consumption and greater nutrient replenishment, especially for nitrogen. This expectation is based on anticipated increases in the production areas of both wheat and maize. In Argentina, these cereal crops are generally better fertilized than soybean. Current wheat and maize production areas are now at their lowest levels in 30 years.

In conclusion, Argentine nutrient management is generally characterized by a negative soil nutrient balance, due to rates of replacement/fertilization that are lower than rates of removal. This has resulted in declines in bioavailable N, P, K, and S levels in Argentine soils. Given this context, appropriate fertilizer rates and sources are important to crop production in Argentina, slowing/preventing nutrient export and depletion of soil fertility. Diagnosis of the fertility needs for a field is based in knowledge of the field’s soil and soil testing is important to that knowledge base. Soil chemical analysis and good nutrient management practices are tools indispensable to sustainable Argentine agriculture. 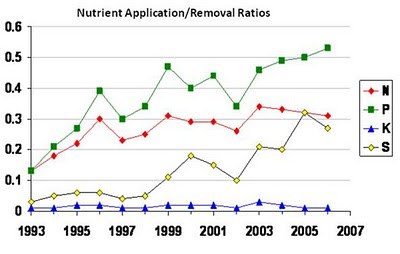 Figure 3: Nutrient application/removal ratios in Argentina from 1993 to 2007.