The recommended window to plant corn in central Kentucky is April 15 to May 15. Yet, many producers will plant earlier than this if the weather allows. Often, we hear that the first fields planted have the best yields. But, this observation is confounded, because the earliest fields planted are often well-drained and best suited for early planting. So, were the high yields due to early planting or good soils or both?

In an attempt to get at this question, data from production farms in central Kentucky were evaluated only for planting and yield. Other variables such as soil type, hybrid number, hybrid maturity, seeding rate, weed control, etc. were not considered. Each data point on each figure represents planting date and yield for a single field in a single year.  Figure 1 is the combined data for all years and the x-axis is “day of year” where 105 = April 15, 120 = May 1 and 135 = May 15. Yields in 2005 were extremely low and most planting dates were between April 10 and April 25, about the earliest planting for any of the years.

The yields from 2005 were very low and nearly all the planting dates were early. The yield loss could be from early planting or from poor growing conditions that season. Since the yields for 2005 were mostly low, Figure 2 compares yields versus planting dates with 2005 omitted. 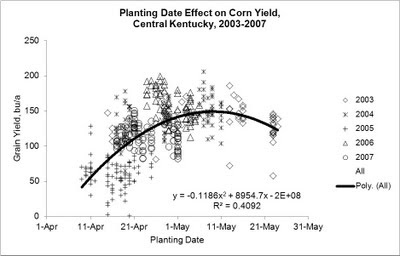 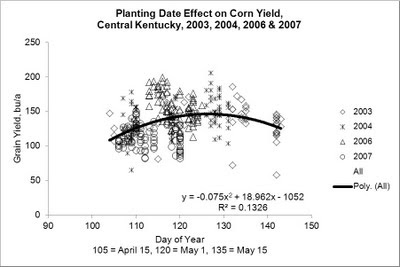 This data is confounded because factors such as hybrid type, hybrid maturity, soil type, soil fertility, pest development, field size, etc. are not considered. Individual years had individual ideal planting dates. The ideal dates were about April 15 for 2003, May 11 for 2004 and April 24 for 2006 while planting date appeared to have no effect on yield in either 2005 or 2007.

When evaluating all of the data over the five years (or four years when 2005 is omitted), the ideal planting date is about April 29 to May 19 for central Kentucky, which is a few days later than the university recommended range of April 15 to May 15 for the same region. The production farm data implies that the ideal planting window is about three weeks instead of four. 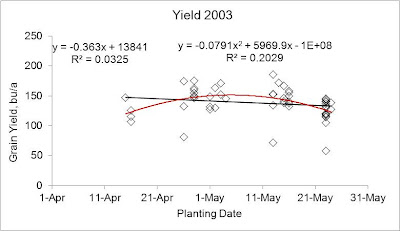 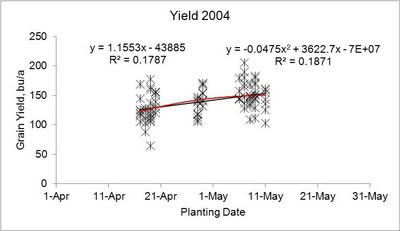 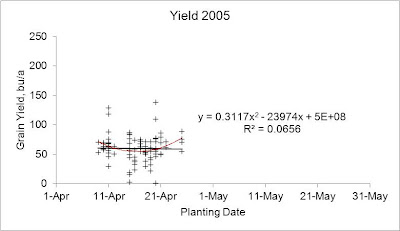 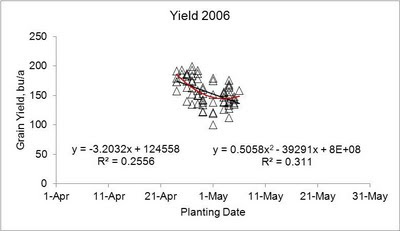 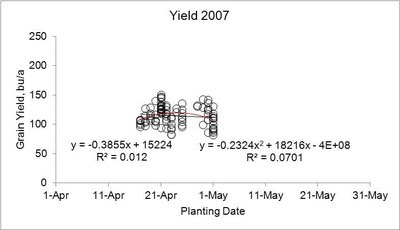