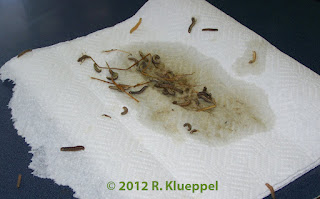 Armyworm larvae have been reported feeding in corn. Although armyworm can damage wheat, that very rarely occurs and when it does is usually much later in the season. Certainly this entire season is much earlier than normal because of the warm January – March temperatures. Nonetheless, the general sequence of events is likely to remain the same.


Captures of armyworm moths in the UK-IPM pheromone baited traps have not been very large. Captures did begin very early this year and the first several weeks appeared to be greater than the rolling 5-year average. However, recent counts have dropped below the 5-year average. At this point I don’t expect an unusually large population for 2012. That means that one should probably concentrate their scouting efforts on those situations that are at greatest risk.

Of special interest will be “NON- B.t.” containing corn products (food grade, white, specialty, etc.) fields that were planted into a cover crop, especially a grass cover, or into new ground (fallowed, pasture etc.) where grasses might predominate. If armyworm eggs and larvae were already in these grass covers, killing the cover will serve to move these insects over to the newly emerging corn. So, if this is your situation it may pay you to scout your corn, even if the cover / weeds have already been killed back.


Since most of the field corn products we grow in Kentucky are genetically modified to contain one to several “B.t.” expressing genes, you may in fact get some control of armyworm with these. Of course corn rootworm “B.t.s” will not have any effect. I would expect the Viptera “B.t.s” to be quite active and those products that claim control of corn earworm and fall armyworm to have some activity.


In corn, chemical control should be considered if 2 or more larvae are found on 25-30% of the plants. Armyworm is not very difficult to control in Corn, providing of course, one gets decent coverage. If insecticidal control is required, see ENT-16 Insecticide Recommendations for Corn or ENT-47 Insecticide Recommendations for Small Grains. These publications are available at your County Extension Office or On Line at: http://pest.ca.uky.edu/EXT/Recs/welcomerecs.html
Posted by Doug Johnson at 4:31 PM