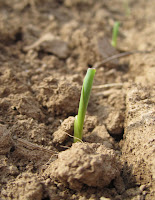 An excellent article was written about the planting date conundrum in Indiana. Here in Kentucky, we see a similar conundrum. Recently, I asked producers across the state to send me planting date and corn yield data from their operations. They sent me corn planting dates and yields from 2003 through 2012 (Figure 1). The data would indicate that the best planting dates for Kentucky would be from about the last week of April through the third week in May. Who is going to believe that?!


Since 2012 was extremely early for planting and extremely poor for yields, we examined the data from 2003 through 2011 (Figure 2). The first thing to notice about the data from 2003 through 2011 is that the correlation between planting date and yield is very week, suggesting that there may be no relationship between planting date and yield for this data set. If there is a correlation, it would suggest that corn should be planted in May for Kentucky. Again, who is going to believe that?!


Perhaps the point with this exercise is that we do not need to be in as big of a rush as we think we do to finish corn planting.

Corn planted the past week or so should begin emerge in about 7 to 14 days. If the young germinating plant experiences fluctuations in soil temperatures, it could deform the mesocotyl development, resulting in "corkscrew corn". Scouting planted fields for germination and emergence would be wise this season. Deformed plants most likely are not the fault of any seed company, or any chemical, but the result of the fluctuating temperatures.


We fully expect producers to plant corn as long as the sun shines and the soil moisture is suitable, because the calendar says it is time to plant corn. However, the experience of recent seasons suggests that we should not worry if corn is planted later than we would prefer.