Expect a Later, Wetter Grain Harvest, Get the Driers Ready 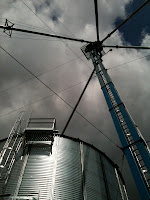 Once the corn reaches black layer, it then relies on the simple physics to dry down to a harvestable moisture. Corn this season will reach black layer and try to dry down in September and early October, when the day length is shorter and temperatures historically are cooler. Those shorter days and cooler temperatures will slow dry down of the corn kernels. Barring a sudden and dramatic shift in the current weather, corn harvest in Kentucky will be late. If September ends up being one of the hottest and driest on record, then disregard the previous comments. However, if September is "normal" or follows the current weather patterns, producers need to look at what should be a good harvest, but a late and wet harvest, and prepare their bins and driers now.