Since writing my last update on SDS, I have come to realize that the disease is causing more damage than I had intially thought (this is unusal). Thus, I decided the prudent thing to do was to provide an updated report on SDS.

Soybean sudden death syndrome (SDS) caused by the soil-borne, root-rotting fungus, Fusarium virguliforme, is evident in soybean fields across the state. The disease is quite severe in certain fields in west Kentucky where large areas of fields planted to susceptible and moderately susceptible varieties are affected. SDS has been seen in Kentucky each year since 1985, but incidence varies greatly, depending on the growing conditions. Generally cool temperatures and abundant soil moisture, both of which favor SDS, appear to have set us up for increased incidence and severity of SDS this season. The last time SDS was extensive in KY was in 2009.

Fusarium virguliforme infects roots early in the season and foliar symptoms normally appear during the soybean reproductive stages, as is the case in fields this year. In a more typical year (i.e., hot and dry during July/Aug), a greater extent of SDS is often associated with very early planting; doublecrop beans are rarely affected.  However, in a year like this one, planting date associations are blurred and we may find that the disease even ends up developing in doublecrop soybeans as well as full-season beans.

SDS is first evident in foliage as yellow blotches between the veins of leaves in the mid and upper canopy. In most cases, blotches coalesce and result in a yellow and brown discoloration between the veins, but the veins remain green (Fig 1). 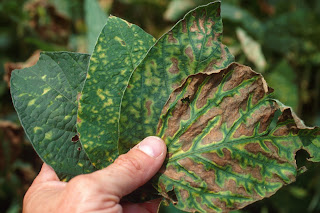 Fig 1. Range of SDS foliar symptoms.
In severe cases, symptomatic leaflets will crinkle and eventually fall off, but the petioles will remain attached to the plant (Fig 2).  If severe symptoms develop during early to mid pod fill, pods may abort and/or fail to fill properly. Up to 85% yield loss is possible in severely diseased areas of fields. If symptoms come in when pods are filled or nearly filled, limited yield loss will occur even when severe foliar symptoms are evident. With SDS, the timing of symptom expression relative to crop stage is the main consideration when assessing probable yield damage caused by the disease. 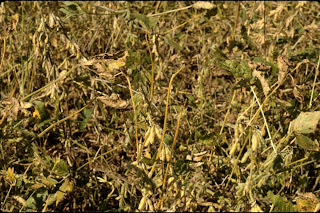 SDS can be evident in individual plants, groups of plants or in large areas of various shapes. Many times, symptoms will be most evident in compacted and/or low areas of fields due to the tendency towards increased moisture retention in those areas. Increased incidence and severity of SDS is often associated with stress/damage caused by the soybean cyst nematode.

Foliar symptoms are the result of a toxin produced by the fungus in diseased root tissue.
The foliar symptoms described above can look similar to stem canker, Dectes stem bore injury, and even pytotoxicity symptoms caused by certain triazole fungicides. Thus, foliar symptoms in and of themselves are not diagnostic for SDS. Additional SDS symptoms include severely rotted roots and a light brown discoloration of the stem when sliced open with a knife (healthy stems will appear a cream color). When all three symptoms are evident, you can be quite confident that you have made an accurate field diagnosis of SDS.

This disease is poorly named in that SDS does not usually suddenly appear, nor is the end result always death. In fact, SDS foliar symptoms first appear much like other diseases, a little at a time. It is only "sudden" if you have not been looking. I have seen plants with SDS recover (put out leaves without characteristic foliar symptoms) and in many cases the disease comes in too late to significantly reduce yields. That said, I am quite sure that SDS will significantly impact yields in many fields this year.

The best way to limit the development of SDS is to plant a resistant variety and to avoid very early planting dates.  However, there is nothing that can be done to slow or stop SDS once it is evident in a field.  Applying a fungicide WILL NOT HELP.
Posted by Don Hershman at 11:33 AM