Summary: During the last week of August 2013, Kudzu bug adults and juveniles were collected from Kudzu along Interstate 75 and US Highway 25 E and W in Whitley, Bell, and Laurel Counties KY. Samples taken in Kudzu along US 25E in Knox Co. KY and Interstate 24 in Christian Co. KY did not capture Kudzu bug. This represents the first know collection of Kudzu bug in Kentucky. 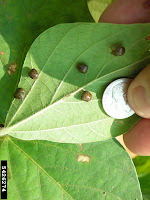 Knowing that Kudzu bug movement was continuing toward Kentucky along the I-75 corridor, and at last report was in Claiborne Co. TN which borders Bell and part of Whitley Co. KY, it seemed  prudent to take some samples along I-75 in these southeastern Kentucky Counties. On Aug. 27-28 I traveled to this area and along with Garrard Coffey ANR agent in Whitley Co. we sampled kudzu patches along I-75 and  US 25W in Whitley Co.  Later samples were taken in similar areas in Bell, Knox and Laurel counties along I-75 and US 25E. This was a very small and targeted sampling, designed to look in the places most likely to be infested. Live Kudzu bugs were collected in Whitley, Bell and Laurel counties. Only a single sample was taken in Knox County and it was negative. All the positive samples produced only small numbers of insects, a maximum of 5 in 100 sweeps (15" sweep net), but both adult and juvenile forms were captured at multiple locations. It appears likely that the current population is not large, but reproduction is occurring. Several samples were negative, but the number of sampling sites is so small, that zero probably does not have much meaning.

There is no way of knowing just when these insects arrived in southeastern KY as there was no sampling when the population was at zero. Whether the insects captured first arrived in Kentucky this year or if these are the offspring of “overwintered” kudzu bugs is unknown. Perhaps a follow up survey in 2014 will give us some idea of how this pest over winters in Kentucky.

Samples have also been taken in kudzu patches along I-24 (westbound side) just north of the Kentucky welcome center (Christian Co. KY). No kudzu bugs were collected there, but samples will likely be taken again before soybean harvest. As with the eastern Kentucky samples, finding something would indicate that the insect is present but not finding any may not mean much.

While the southeastern Kentucky captures represent eventual risk to soybean in east and central Kentucky, the newly recorded infested Rutherford Co. TN represents the more likely path to western Kentucky soybeans. This county is just southeast of Nashville and sits astride I-24, which joins with I-65 in Nashville. These two highways represent pathways from Georgia via I-24 and Alabama via I-65, into the western Kentucky production area.

The populations along I-75 or I-24 are unlikely to be an agronomic threat to Kentucky this year. However, if this pest is able to maintain itself in our region, particularly by successful overwintering, it is likely to become an important pest. The main agronomic crop affected will be soybeans. However, this pest feeds on a very wide range of plants, especially legumes like beans, lentils and peas.

In addition, this bug is a home invader. In fact, this is how the kudzu bug was first collected in metro Atlanta. Home owners were calling their pest control operators because the pest was congregating in very large numbers on their houses. No one really knew what the pest was until they were sent to one of the few people in the US that is familiar with this family of insects. It is a true invasive with no close relatives in the Americas.

Our thanks to Stacey White ANR Agent in Bell Co. for his help in finding sampling locations.
Photo: Philip Robertson, University of Georgia
Posted by Doug Johnson at 12:05 PM