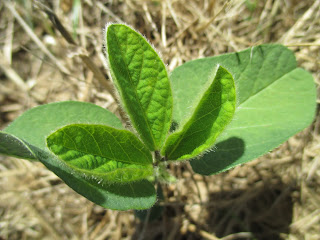 The 2016 soybean season has quickly become a challenge for much of the state. For soybean fields planted in June, stands were reduced because of the extremely dry conditions across much of the state. Some regions received less than 2” for the entire month of June. These struggling soybean stands were then inundated with significant rain starting over the Fourth of July weekend and not ending until last week. The official precipitation recorded by University of Kentucky Agricultural Weather Center was as much as 10” for parts of the state. However, localized reports of more than 16” occurred. This led to considerable flooding in the state or at a minimum extended periods of saturated soil conditions. As such, many producers are considering replanting soybean fields.


The first question on most minds is “How much yield should I expect from late-planted soybeans?”.
Based upon a 6-year (2006 to 2011) study that examined two relative maturity groups (late group II and mid group IV) the most recent estimate of Kentucky’s soybean yield loss per day is:

To calculate expected soybean yield, based upon planting date:


1.       Calculate the number of days after the optimal planting date


a.       Multiply the number of days past the optimal planting date by yield loss per day


Days past May 9, the optimal planting date, is 71 days


Days past April 20, the optimal planting date, is 90 days


Be aware that reducing the relative maturity of the soybean cultivar by more than about 1.0 relative maturity may increase the risk that the pods will be near or at the soil level. This is because the internode distances are typically reduced as planting date is delayed, which can have a much more dramatic effect on shorter relative maturities.


The calculations above for expected soybean yield assume “normal” weather conditions occur after planting. That means adequate precipitation occurs, maximum temperatures are not excessive during flowering and seed pod development, and frost does not occur before soybean maturation. If any of these, or other stress events occur, soybean yield may be markedly lower than estimated above.
Posted by Carrie Knott at 5:16 PM