The extremely wet spring experienced over much of Kentucky has delayed anhydrous ammonia applications. When the soil finally is dry enough for field work to begin, corn producers likely will not be willing to further delay planting to allow anhydrous ammonia applications to become safe. The standard recommendation is to wait 7 to10 days after injection before planting corn, but delayed planting may also reduce grain yield. A second option is to plant corn and then sidedress anhydrous after corn emergence. If anhydrous ammonia is applied before planting, then care must be taken to avoid seedling injury.

The Problem
Free ammonia (NH3) in the soil is extremely to toxic emerging seedlings and their roots. When anhydrous is injected into the soil, it immediately begins to convert into ammonium (NH4+) by associating with hydrogen ions. Hydrogen ions can come from soil cation exchange sites, but most come as a result of splitting water molecules, leaving behind hydroxyl ions (OH-). This reaction dramatically increases the soil pH at the injection site, which allows some free ammonia to exist in the soil for some time. Several soil factors, including moisture content, texture and temperature, affect the length of time that ammonia persists in the soil. Low soil moisture causes the ammonia to persist longer in the soil, as does cooler soil temperatures. However, shot-term ammonia concentrations are higher in warm soils. Excessive soil moisture increases chances of ammonia loss.


For more on this issue, go the Corn and Soybean Newsletter. 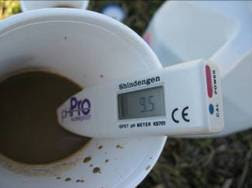 Many anhydrous ammonia applications were delayed because of the wet weather. 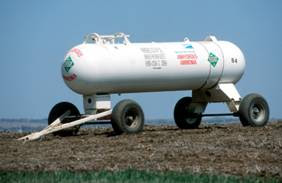 A handheld pH meter can help you quickly determine the soil pH, and thus, the risk of ammonia injury to germinating and seedling corn.