Several factors can contribute to this increased risk:

Fields not planted until the last week of May or into June have the highest risk of foliar disease. Producers planting corn late this spring should use hybrids with adequate levels of resistance to gray leaf spot. Selecting hybrids with good resistance to gray leaf spot is especially important if the field is under conservation tillage (30% or more residue cover) and has had corn anytime in the last two years. Also, if a field has a recent history of southern leaf blight or northern leaf blight, consider those diseases in hybrid selection.

If you do choose to use fungicides, it is always a good idea to leave at least one untreated strip in the field in order to see if the fungicide provided any benefit. Sometimes it will but often it won’t, and getting on-farm evidence helps in making future farming decisions.

Figure 1. The more of these factors are in place, the higher the probability of getting a positive economic return from a foliar fungicide application. 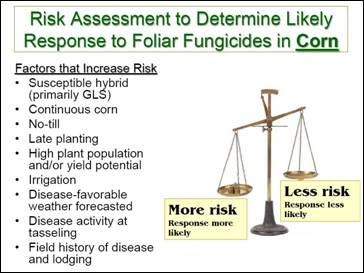