"Yield Penalty" in Corn after Corn: Could Root-Attacking Organisms be the Cause?

For decades, mono-cropping without rotation has been known to often result in reduced yield. Indeed, long-term studies at the University of Kentucky show that first-year corn-after-corn commonly experiences a "yield penalty" that growers should factor into their economic analysis (Figure 1). One of the interesting things about this yield penalty is that it appears to be greater as corn yield increases. This suggests that, in the future, the "rotation effect" will be not diminished (rather, will be enhanced) in the presence of better varieties, better management, and excellent corn growing conditions. 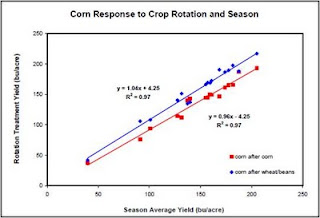 Figure 1. Comparison of yields first-year corn-after-corn vs. a one-year rotation for the 1989 to 2006 production seasons.

Late this season, we observed very little foliar disease in any of the plots in these long-term studies (as is often the case, according to Dr. Grove). While diseases like gray leaf spot and northern leaf blight certainly can be very damaging in continuous corn, these diseases were much too limited in these trials (well below 1% severity during late dent) to affect yield. We also observed that there were more green leaves on corn in rotation than on corn following corn, as well as higher yields (Figure 2). 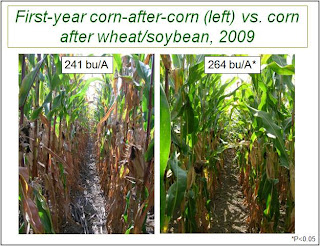 The facts from these trials are:

These facts lead us to wonder about the role of root-attacking microorganisms in the yield penalty observed in many UK trials (fungi, nematodes, others?). (Root-attacking insects such as western corn rootworm are also likely to be involved with long-term continuous corn, though not likely in this trial, as explained below).

Research on whether soil-borne diseases account for part—or all—of this yield penalty in corn have been, surprisingly, limited. Ohio State researchers found evidence that a soil-inhabiting Pythium species might become damaging to corn roots on poorly drained soils under continuous corn, but these weren't clearly proven to be causing reduced yields (reference #1). Researchers at the University of Georgia (reference # 2) showed that soil-borne pathogens were involved in yield declines observed in a cropping system where corn was grown as a continuous double-crop over several seasons, but that was a production system very different from the Corn Belt. Unfortunately, these and other studies we have seen have not clearly identified root diseases as a significant factor in the yield penalty in continuous corn grown in the Corn Belt.

Western corn rootworm has been a pest since the early 1980's in Kentucky with active infestations restricted to continuous-corn fields. Typically a few years are required to build an economic infestation, but the more years a field remains in continuous corn the greater the likelihood of rootworm problems. Initially when corn rootworm moved into Kentucky, injury to corn was very easy to see as lodging and 'goose-necking' of corn were often in evidence. However, today's hybrids tolerate rootworm feeding better with reduced levels of lodging. To diagnose a rootworm infestation, root samples need to be dug, roots washed and examined for the characteristic root pruning, scarring, and proliferation of secondary root regrowth. Having stated this, corn rootworms are NOT the sole cause of yield penalties with continuous corn, they may not even be the most common cause. While corn rootworms have the potential to reduce yields in continuous corn, it is unlikely in this case given the insecticide treatments applied in this study and that this was the first year of corn following corn.

So this Extension article can't really present any solutions for growers. Of course, answers are what we want, but arriving at the answer requires first framing the right question. And so, we wonder: what role do root diseases play in the "yield penalty" of continuous corn?