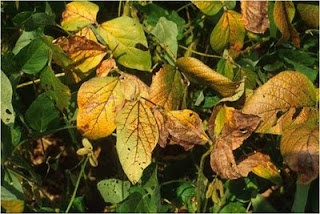 Considering the cool, wet, and late year we have just experienced, it should not come as a surprise to anyone that certain late-season soybean fungal diseases are more extensive than usual. In a more typical year, crops that mature in late summer, especially early maturing varieties planted early, tend to experience the most intense foliar, stem and pod fungal disease pressure. This is because those crops are filling pods and maturing at a time when conditions tend to favor disease development (hot and wet). Normally, doublecrop and other late-planted crops are less susceptible to late-season fungal diseases because they mature in September-mid-October when conditions tend to be dry. Not this year!

Cercospora leaf blight (CLB) seems to be affected the most this year by the weather. CLB is usually first noticed by producers when the upper leaves in the canopy begin to turn yellow, often with a bronze tint. A close inspection of affected leaves reveals very small, dark lesions that are frequently on or near major leaf veins and on petioles. Severely affected leaves are blighted and eventually drop off the plant. Blighting of upper canopy leaves was rapid in some fields this year due to the unusually wet late-season conditions. Some producers suggested that the visual impact was akin to frost injury or “sunburn”. Infected pods and seed develop a purple color called purple seed stain (PSS). PSS can reduce marketability of grain and severely infected seed have reduced germination and vigor.

The impact of CLB is highly variable and can range from no significant impact to substantial yield and grain/seed quality reductions. The foliar phase of the disease contributes the most to yield loss when the disease is extensive. The time of disease onset relative to crop growth stage, and the speed with which the disease develops, are the key factors that determine crop impact. If blighting occurs while pods are filling, then significant yield and quality losses can be anticipated. However, if pod fill is mostly complete prior to the onset of blighting, then yield damage will be minimal. Extensive PSS can occur even if foliar symptoms are moderate, but it is my experience that PSS related seed quality problems are rarely a problem in Kentucky. If seed fill has been compromised, it is probably not appropriate to blame everything on CLB. Numerous other problems related to the cool, wet early part of the season most assuredly contributed to yield losses in many fields this year.

Past experiences and observations suggest that most commercially available soybean varieties have at least some resistance to CLB in spite of limited breeding efforts targeting the disease. However, no varieties are immune. Fungicides can reduce CLB and PSS, but no fungicides are highly effective. In general, strobilurin fungicides do a slightly better job than triazoles or thiophanate-methyl. Also, single applications applied at the R5 (beginning seed) growth stage tend to perform somewhat better than applications made at the R3 (beginning pod) stage. Of course, multiple applications perform better than single applications, but even then, results are not stellar.
Posted by Chad Lee at 1:50 PM