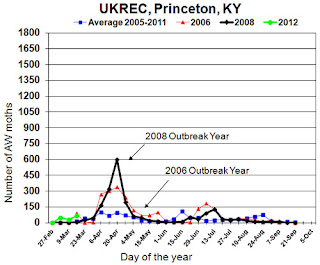 UK-IPM pheromone baited traps for armyworm captured 49 moths for the week ending Friday Mar. 9th. This is the earliest capture date and the largest initial capture for this insect in 19 years of trapping. What this may tell us about the season is difficult to know at present. Nevertheless, it appears that if this weather trend continues we will see armyworm populations much earlier than we would normally expect.

Armyworms, (Mythimna unipuncta) also commonly called “True armyworm” prefers feeding on grasses and in Kentucky can be an early season pest of small grains , corn and occasionally forages grasses. Our concern this year may be that both the plants and the pests will appear earlier than we would normally expect. We will monitor the moth flights and compare them to past year’s captures to try and estimate the potential for a problem population.

At this point it is important to remember three points: 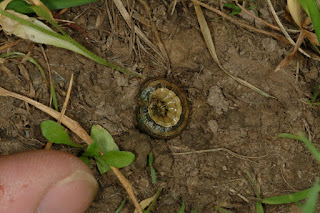 It is not the moths that cause damage. The moths appear first and after mating lay eggs that hatch into caterpillars. It is the caterpillars, feeding on the plants that causes the damage.

Comparing moth capture numbers with captures in past years that have resulted in known crop damage can give us an indication of what might happen in the current year.

Using a predictive model, we can roughly calculate when the caterpillar stage will appear by using the date of moth capture and calculating the development rate of the caterpillars using daily maximum and minimum temperatures.

At present it is too early to get really worried about this insect. We will need to look at the captures for several more weeks to understand if a trend is truly developing. Nevertheless, the early counts are larger and earlier than normal, are greater than the rolling 5-year average, and appear to be following the trend line for the 2006 outbreak year. If this continues I will begin running the model to predict the appearance of the damaging caterpillar stage.
At present it is sufficient to understand that something out of the ordinary is happening. We have plenty of time to figure out whether or not it is important.
Posted by Doug Johnson at 1:39 PM