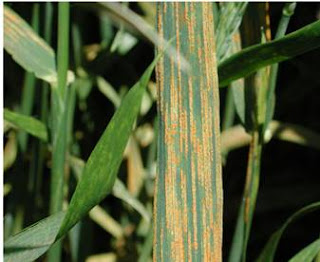 Scientists in Arkansas are really sounding the alarm about the unusually early and extensive appearance of stripe rust in wheat. Based on our mild winter, it is very likely that stripe rust has overwintered in KY, too, but I do not know the extent. It is a very easy disease to identify and it would be prudent to scout your fields for the disease now. Scientists in AR are recommending (and I concur) that growers finding stripe rust at any level may want to add a fungicide to the mix as they go over the field to apply any early insecticide and/or herbicide sprays. Most modern fungicides are very effective against wheat rusts. The fungicide, tebuconazole (Folicur and generic products), is extremely effective against rust diseases and the cost is very low. This is one case where an early application of a fungicide could be helpful (assuming stripe rust is observed!).