March Weather is a Poor Indicator of Late Spring Freeze

With all of the warm weather there have been questions about whether there is any correlation between that warm weather and the last spring freeze event. The quick answer is No!

Tom Priddy, our meteorologist ran some numbers from Paducah and Lexington on the warmest months of March over the last 100 years or so. He ranked the top 23 warmest and then identified when the final freeze event occurred. For Paducah, the average was April 12, which is four days after the median freeze date for Paducah. In Lexington, it was April 16 which is one day after the median freeze date. For those 23 warmest March months, the range on final freeze was March 22 to May 27 in Paducah and April 3 to May 4 in Lexington. In only two years out of those listed for Paducah did the last spring freeze occur in March. For Lexington, the last spring freeze always occurred later than March.


There were several other ways to evaluate data as well. For example, we looked at how the number of days in March over the past 40 years that had high temperatures above 65 degrees Fahrenheit would affect the late spring freeze. There was no correlation.  We evaluated all March average temperatures from 1971 to 2011 and compared those to the final freeze date. There was no correlation. 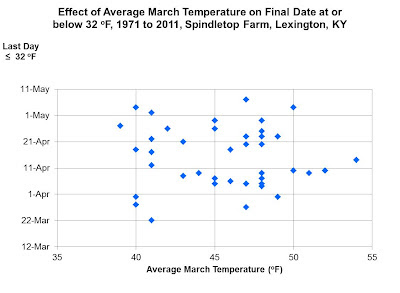 So, the real gamble here is whether or not corn planted in March will survive and April freeze. If only one freeze event occurs and the temperature is in the 30's for a short period of time, then corn will do just fine. If the temperatures are colder or the duration longer, then corn will not survive. The gamble is a little larger because of when crop insurance kicks in for corn planting and whether or not seed companies will cut deals on replanted seed for corn planted in March.
Posted by Chad Lee at 10:36 AM