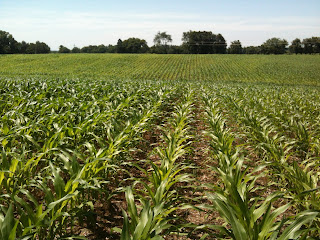 The images from field problems in Kentucky has been updated. Because the file was getting very large, you can access only the May 2012, June 2012 or the full version which includes wheat. If you access the full version, just be aware that it is 23.5 MB... and growing.

The most common symptom in corn is potassium (K) deficiency. In most cases, the K deficiency is the result of root restriction. Most of the root restriction is from compaction, whether it be sidewall or sub-surface. Areas of Kentucky had ample rain during corn planting and getting sidewall compaction would have been very easy to do. The general lack of rain now adds to the problem.

The compaction limits root growth, reducing the root interaction with nutrients. Water is needed for uptake of many nutrients, including compaction. The lack of water reduces the amount of K taken up by the plant. Either dry weather or compaction on their own can cause problem, but having both together causes even more troubles.