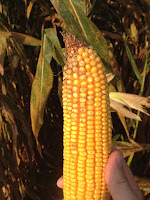 The USDA NASS lowered their estimates for Kentucky corn yields by 10 bushels per acre and soybean yields by 2 percent in their latest report. The negative numbers reflect calls and comments we are receiving from producers across the state.

In August, most of our corn and soybean fields looked great. The foliage was lush, canopies were closed and the crop looked to be in excellent condition. Now, farmers are getting surprised about low yields in some fields. Just to clarify, these reports do not reflect all fields. There are some really good yields being reported. But, there are some really bad yields as well and these fields were the surprise. I think the biggest contributor to these bad surprises is the weather. Most of Kentucky was wet early and dry late. The wet weather encouraged shallow root systems. The dry weather late penalized crops with shallow roots.


This whole growing season seems to have bounced between extremes. A large part of the state was wet during planting. Then, we were very close to drought conditions at the end of June. A lot of the state received flooding rains in early July. We stayed fairly wet through much of July and early August (Fig. 1). Then, we turned dry again at the end of August and into September. For the past 30 days, nearly the entire state is at 1 to 2 inches below normal (Fig. 2). Those extremes put a lot of stress on corn and soybean plants.

The frequent rains in July created conditions for heavier disease pressure than normal on corn. Fungicide timing was critical to fungus control this year. We have walked corn fields where there was no effect from fungicide and other corn fields where properly-timed fungicides protected 20 bushels or more. Disease pressure from gray leaf spot, common rust and southern rust was heavy.

The shallow roots and damaged leaf material forced plants to pull photosynthate from the stalks to help fill the seed. The dry weather prevented those shallow roots from pulling in more nutrients and water to replace what had been sent to the seed. All of that resulted in plants with weak stalks and weak ear shanks. On a side note: this was a bad season to try to rate stalk strength of corn hybrids. Almost all corn hybrids we investigated had weak stalks at harvest.

Some of what we observed in corn could be taking place in soybean. The USDA-NASS report projects lower soybean yields and I assume they are using some of the early yield reports to help with their estimate. Those early yield reports are on full season soybeans. I suspect that later soybeans (double crop and late-planted) will be affected more negatively from the late dry weather.

There is more going on some fields than weather, but the bad surprises begin with the weather.
Posted by Chad Lee at 5:08 PM